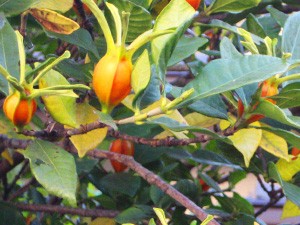 The Kuchinashi-iro, dyed in the fruit of the gardenia, is yellow with a little redness. Separately referred to as “梔子色”, there is a width slightly in shades of reddish shades.

Gardenia had been used in the bottoming of the “Oni” from the Nara period, but there was no color name of “Kuchinashi”. It becomes as color name can be seen from the Heian period. At that time, it has been referred to as the “Kikuchinashi”, except that there is a description in the “Engishiki”, even in such as “Kokin Wakashū” the name has been poems. However, strictly speaking, has been distinguished by calling the color was slightly overlapped dyed red safflower yellow dyed in gardenia Kuchinashi-iro, the color dyed only in the gardenia and Kikuchinashi.

Although there are “Fukakikuchinashi” “Asakikuchinashi” to another is to “Engishiki”, in the staining method with the same gardenia and safflower as “Oni” of the secondary colors together Kinjiki, also from the fact misleading also similar hue, a temporary “Kinjiki “and has been time there was.

Gardenia, Rubiaceae gardenia genus of evergreen shrubs. In addition to native as shrub forest in about tree height 1-3 meters, it has been cultivated as a horticultural. The flowering season is 6-July, bloom one by one, 10 – in around November and give the fruit of red yellow.

In fact, the gardenia is also referred to as “Sanshishi”, it has been used as a dye and Kusuriryo from ancient times. Even now, it or is used in coloring of sweet potatoes when making Kinton.

Theory that it is the origin of the name of gardenia, theory and became from the fact that not crack even when ripe fruit “no mouth”, “KUchinawa = snake”, “grow on trees Nashi = fruit” of, has changed from Kuchinawashi to Kuchinashi also it seems to be.

Kuchinashi-iro has preached popular in the color, the law of Edo herbalism’s “Kaibara Ekken” also 支子 dyed through the Edo era. Also, referred to as the “no mouth” from the fact that this fruit does not open his mouth even when ripe, that of Kuchinashi-iro was also referred to as “Iwanu-iro”.