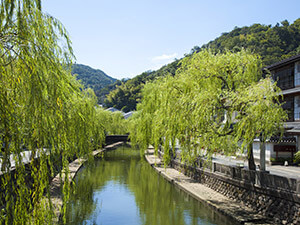 The Yanagi-iro is a bright yellowish green reminiscent of the color of willow leaves in early summer.

In the Heian period, the color of the willow was used extensively, as it was found in Kasaneirome and Oriiro. In fact, you can also see the words “Sakyo is blue with Yanagi’s non-printed Karaginu” and “Yanagi’s Ueshiro’s Okouchigi” in the “Shiki Shikibu Diary”.

In addition, there are “the front Usuao, the back Usuao” in the other thesis, but “Ao” of both theories is the color of “green” in the present age.

“Yanagi” will be worn from spring to winter.

Oriiro expresses the color of the willow with “Moegi” for the warp and “white” for the weft.

Yanagi is a general term for deciduous trees of the genus Willow. In Japan, “Yanagi” generally refers to weeping willow.

Yanagi is also famous as a motif for the Hanafuda November bill. By the way, the person on the picture card is the Heian-era Noh writer “Ono Tofu”.

As the Zen words “Ryuryoku Kakou” and “willows are green, flowers do not give”, in Japan, willows have long been a favorite plant. For this reason, there are so many color names associated with willows, and there are more than a dozen types such as “Aoyagi”, “Omoyanagi”, “Urayanagi” in the Heian period, and “Yanaginezu”, “Yanagicha”, which became popular colors in the Edo period.

Like the song “Kokin Wakashu”, “Yanagi-iro” is synonymous with “Spring Color” in Japan, along with “Sakura-iro”.